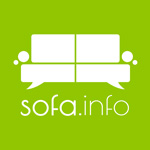 Whoever is trendy today sits in a beanbag. Do you also? well maybe not all the time, but having a beanbag not only looks very good but is also quite practical when you need more seating at short notice. Beanbag chairs are also practical because they can easily be stowed away in every apartment, find a place in every corner and you can arrange the beanbag for every sitting position.

The filling is just as easy to get over the Internet in an Online Shop or you can search for it locally. So what are you waiting for – and order or buy a beanbag. Have fun sitting comfortably and simply.

The beanbags are usually made of a water-repellent material and filled with polystyrene beads. As far as the filling is concerned, however, there are no limits, because there should also be be be sitting bags filled with pebbles or coarse sand, mostly for outdoor use, i.e. garden, terrace or on the beach.

It is not difficult to buy a beanbag today, because these are now available in every furniture store. It is even easier via the Internet, because the range of beanbags is enormous, as is the variety of colours. The local furniture stores are not able to compete in terms of price, as many beanbags from the Far East, such as China, can also be ordered on the Internet. Basically these are also not worse than those in the specialized trade, which this gets its beanbags as is known also from China. There are few manufacturers who manufacture their beanbags themselves and not in China.